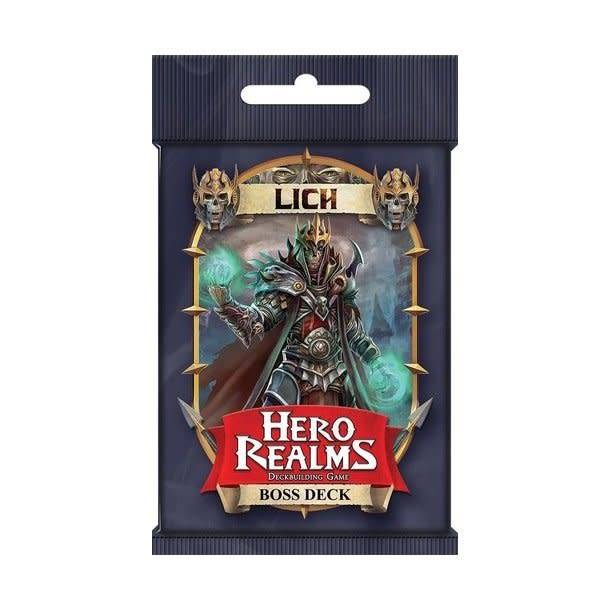 1 vs 3 Multiplayer is brought to Hero realms with the Boss Deck - Lich. One player takes control of a powerful Lich and fights off the pesky adventurers looking to fill their coffers.

Welcome to Thandar, a place when you can get anything, including killed.

With the Ruin of Thandar campaign deck due out any time now, we turn our attention from the Cult of Ruinos, to the huge dragon that circles the nearby Kamekrian Mountains, or the evil Lich that dwells in the catacombs of the sacred Mound of Fallen Kings.

Let’s talk about them, shall we?

First of all, there’s one huge difference between the Ruin of Thandar campaign and the Boss Decks. You don’t actually need a human to control the Ruin of Thandar, since all of the decision-making is predetermined by the fall of the cards. (Having a human run it is quite fun though, but you don’t need one. You could put a cat there.)

However, you will need a player to control the Dragon and/or Lich, since they will have to make their own decisions, such as: Which player to kill first? When to order the Victory Pizza? These are important questions!

Of course, the Boss has treasure, and the players will risk death (and worse) to get it.

The Lich on the other hand has all of its health contained in SOUL JARS. The players must destroy all of these in order to defeat the vile creature. Each Soul Jar has its own power that must be overcome.