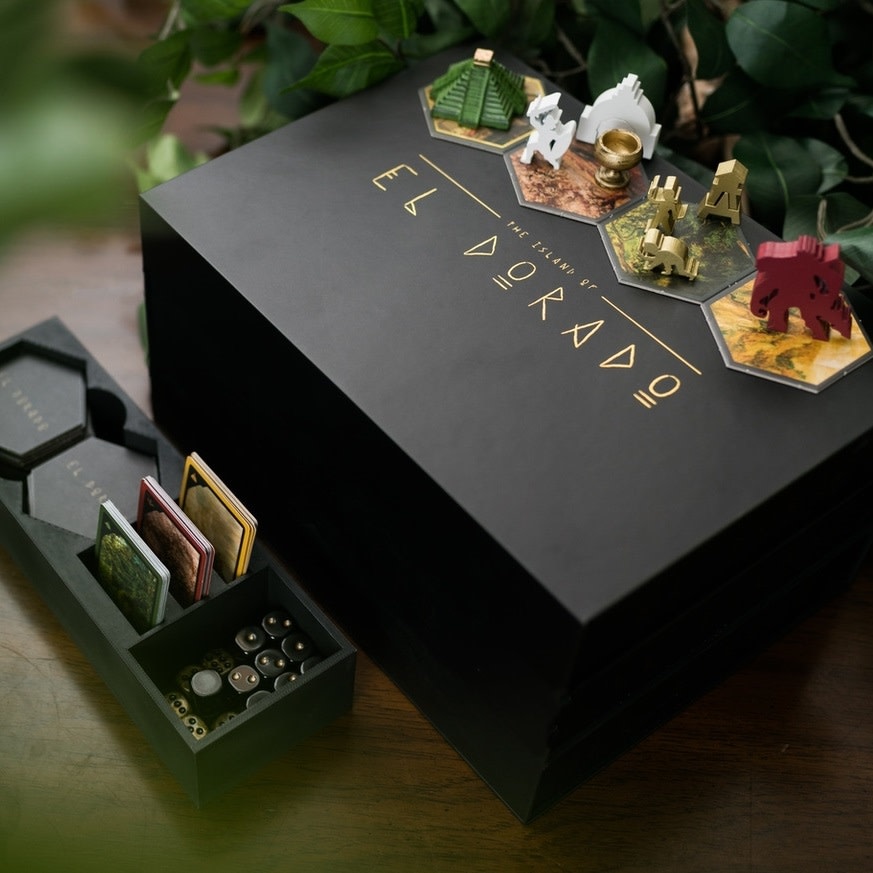 A strategic board game. Explore the island, gather its resources, and cross swords as you race to control powerful shrines.

This is the Kickstarter exclusive big box that includes all content ever released for The Island of El Dorado.

Island of El Dorado base game

In The Island of El Dorado, each player is the leader of a civilization seeking to explore the island to control the four ancient shrines. You’ll discover resources, bodies of water, and the shrines themselves in a landscape which is different every single time you play. Build farmhouses and create villagers to gather resources and grow your economy. Occupy strategic locations on the map using forts to defend against the other explorers who seek to control the island before you do. Legend has it the most powerful shrine is hidden inside a cave, but be wary as you enter. The cave is the most dangerous part of the island.

Civilizations will rise and fall as each player explores, gathers, and fights to control the four shrines of El Dorado. The first player to control all four shrines wins the game. They will rule over the island forever and become richer than a king.

Explorers and Thieves continue to wage war in their pursuit of the untold power hidden in the four shrines on The Island of El Dorado. But even as their civilizations grow vast, their economies grow prosperous, and their armies grow strong, their greatest battle yet will be against the power of the island which they’ve just unleashed. Enraged by the conquests of the explorers and the misdeeds of the Thieves, the Guardian of El Dorado has risen from the depths of the island to reclaim what is eternally hers. With the power of a god she summons beasts, giants, and ruthless natural disasters to reclaim the shrines and cleanse the island of its trespassers.

In The Revenge of El Dorado, explorers and thieves widen and deepen their strategy as they face off against the mythical Guardian of El Dorado and the fury of the island she defends. Expanded explorer boards allow players to upgrade their buildings and units, unlocking new abilities, new military and economic tactics, and new paths to victory.

Fully cooperative gameplay allows explorers to band together against the island, employing complex strategy to control the shrines while defending against the islands varied and savage attacks. Or, take control of the Guardian herself (as a completely asymmetric faction), championing her army of beasts, giants, and the power of the island against the Thieves and explorers as she races to secure her shrines.