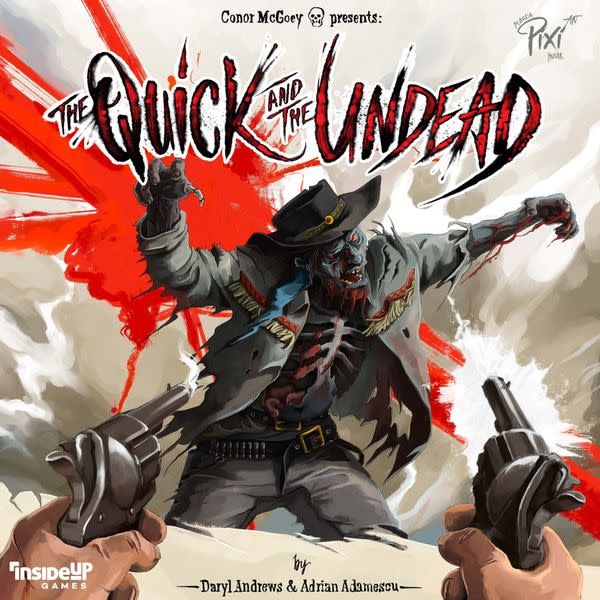 The Quick and the Undead - Deluxe Kickstarter Edition

Ride into West Fort, a small town in the Wild West overrun with undead and show the inhabitants you are not to be crossed.

Ride into West Fort, a small town in the Wild West overrun with undead and show the inhabitants you are not to be crossed. Gain more Notoriety than your fellow Outlaws, take control of the town and claim it as your own. Plan your actions carefully to maximize their effect and prepare to fight over common goals. Earn, steal and shoot your way to notoriety whether in-game, by controlling unique buildings, or by clearing out the undead plaguing the town. Shoot first, ask never.

This Deluxe Kickstarter Edition includes the standard base game with fancy upgraded tokens - 48 metal coins and 36 wooden bullets, plus all stretch goals from the original Kickstarter campaign.

The Quick and the Undead is played over “days” and each day is broken into 3 rounds of actions.

Each round begins with all players simultaneously, and secretly, selecting 1 of the 8 actions by setting the corresponding number on their D8.

Players reveal their numbers simultaneously and place an outlaw from their stash onto their chosen action.

Players will take their turns in descending numerical order, starting with “hired guns” and continuing from action “8” down to action “2."

If two or more players have an outlaw on the same action they will duel.

At the end of a player's turn, if they have enough money, and there are no Undead in the street, they may purchase a building to gain it's unique action. If there is already an outlaw in the building those Outlaws will shootout for control.

After all players have taken their turn, round 2 of the day will begin, however Outlaws may not return to an action if they already have an Outlaw there.

After 3 rounds the current Day is over and all players collect outlaws used on action spaces (not in buildings) and return them to their stash. Outlaws that have been killed are left in the graveyard and are not collected.

At the end of a day in which there are less Undead than players the game will end, and players will add up their Notoriety from tokens taken, Undead killed and buildings owned (if that building has been emptied of Undead.)

The player with the highest notoriety wins.

In the event of a tie, the Outlaw with more money wins.

If still tied, the tied Outlaws duel to the death.

Designed in Canada
Fresh from Kickstarter

The Quick and the Undead

Summit: The Board Game