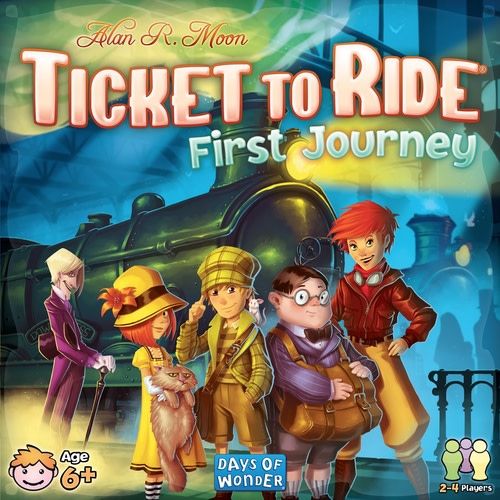 Easy to learn and quick to play, Ticket to Ride: First Journey is the perfect introduction to the Ticket to Ride series. Players collect train cards, claim routes on the map, and try to connect the cities.

Players collect train cards, claim routes on the map, and try to connect the cities shown on their tickets to achieve victory.

So climb aboard and embark on your very own railway adventure!

“Grandpa! I found this strange old hat in the attic. What is it?”
“Good grief, that’s the engineer’s cap I wore when I was a railroader. I traveled all over the country with this thing… listen to me boring you with Grandpa’s stories.”
“But we love stories! Tell us what it was like to be an engineer.”
“Well, I’ve traveled all over the place — New York, Chicago, LA — but one thing I’ll never forget is my first journey. It all started when I arrived at the station…”

When the idea was proposed, I was not sure if I could make Ticket to Ride simple enough to be a children's game. So the result was extremely satisfying. In the very first playtest, I completed the first ticket in the game. I slammed the ticket down on the table and loudly announced "TICKET," trying to be funny and annoying at the same time. Instantly, that became the rule in the game. It's especially fun when you complete one ticket, draw a new ticket you can complete, and then get to put that second ticket down and yell out again.

With adults, you can play a game in as little as 10 minutes. With kids, it may take 20-30 minutes, but even 4 and 5 year olds can enjoy the game with some supervision. The beautiful art is the icing on the cake and really facilitates the play of the younger version.