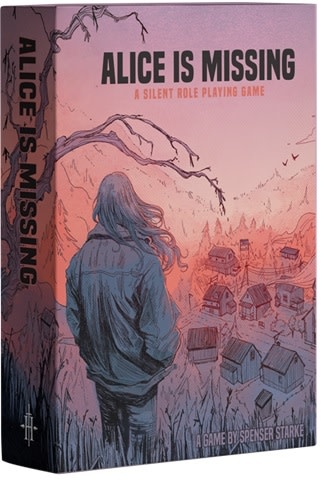 Alice Is Missing is a unique kind of roleplaying game in which players only communicate using their phones, sending text messages to each other as they unearth clues about what happened to Alice.

Alice is Missing is a silent role-playing game about the disappearance of Alice Briarwood, a high school junior in the small town of Silent Falls.

Developed by Hunters Entertainment and published & distributed by Renegade Game Studios, Alice Is Missing is a unique kind of roleplaying game in which players only communicate using their phones, sending text messages to each other as they unearth clues about what happened to Alice.

The game is played live and without verbal communication. Players inhabit their character for the entirety of the 90-minute play session, and instead of speaking, send text messages back and forth to the other characters in a group chat, as well as individually, as though they aren’t in the same place together.

Haunting beautiful, deeply personal, and highly innovative Alice is Missing puts a strong focus on the emotional engagement between players, immersing them in a tense, dramatic mystery that unfolds organically through the text messages they send to one another. Right at home with games like Life Is Strange, Gone Home, Oxenfree, and Firewatch, it’s designed to feel as much like an event-style experience as it does a role-playing game.

Alice Is Missing runs over a single session of 2-3 hours, with 3-5 players. In the first 45 minutes, players create their characters, their relationships to Alice, and their ties with each other. The next 90 minutes are spent uncovering secrets and unearthing clues in an attempt to discover where Alice is, and who is behind her disappearance.

Though text messages seem to be the most common mode of communication in our modern era, they are rarely utilized as a storytelling medium.

The integration of texting into the gameplay unlocks a brand new way to play RPGs that is unlike anything you’ve likely experienced before. It’s personal, immersive, and perfect for remote play.

Powered by simple but unique card mechanics that give everyone equal footing in telling the story, the game runs without a GM, or gamemaster, and instead empowers the players to create the story together.

While in-game time is fluid and the text messages could take place over the course of a day or more, the actual gameplay lasts a total of 90 minutes and is accompanied by a beautifully cinematic, licensed music playlist (featuring artists such as Message To Bears, This Patch of Sky, Justin LaPointe, and Be Still The Earth) which acts as both a timer and a soundtrack for the game.