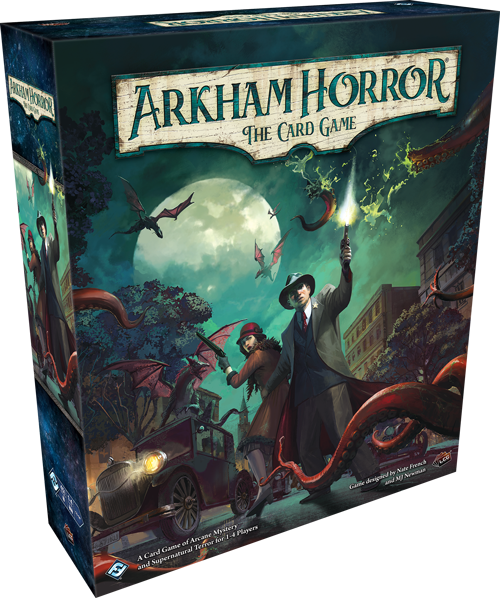 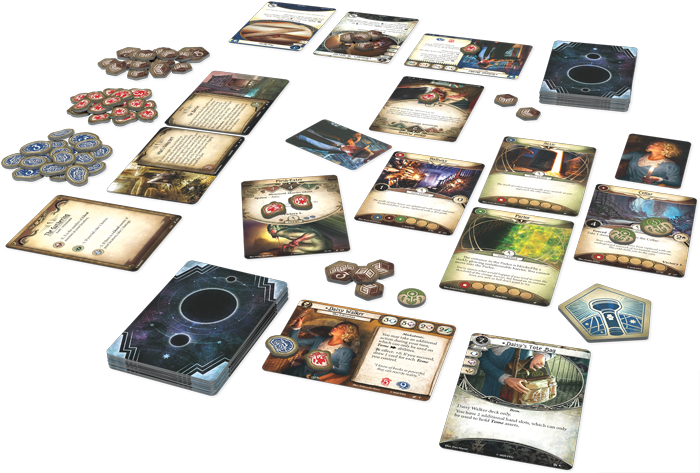 With a revamped system of organization and a number of quality-of-life improvements, this new version of the beloved Arkham Horror LCG’s core set is the perfect way for someone to dive into the game

The boundaries between worlds have drawn perilously thin. Dark forces work in the shadows and call upon unspeakable horrors, strange happenings are discovered all throughout the city of Arkham, Massachusetts, and behind it all an Ancient One manipulates everything from beyond the veil. It is time to revisit that which started it all…

With a revamped system of organization and a number of quality-of-life improvements, this new version of the beloved LCG’s core set is the perfect way for someone to dive into the game. The box comes with everything you need to get your Arkham campaigns started, including enough cards and components for up to three other players to join you in your quest against the Mythos. Read on to learn more about Arkham Horror: The Card Game and why it has captivated players for almost five whole years!

Note: Veterans of the Arkham LCG will already know the information in the next section, and thus will want to skip ahead to the “What Has Changed” section of this article.

What is Arkham Horror: The Card Game?

For those of you who have never played Arkham Horror: The Card Game before, this game is a cooperative Living Card Game set in the early 1900s against a backdrop of Lovecraftian horror. As unspeakable evils and unknowable horrors seek entry to our world, one to four investigators work to unravel the arcane mysteries and conspiracies before it is too late.

Each player assumes the role of one of these investigators and builds a deck of cards that represents the abilities and assets of that character. During your turn, you can put cards into play, move your investigator from location to location, investigate for clues to advance the story, or attack—and hopefully defeat—a monster. Once all players have taken their turn, the game shifts focus to the machinations of the Mythos, and new threats will spawn that you and your fellow investigators will need to deal with. If you take too long, then the enemy’s agenda will advance, which could lead to an unfavorable outcome for the scenario!

The investigator’s skills—willpower, intellect, combat, and agility—are represented by the four numbers and symbols in the top-right of their investigator card. The numbers represent how skilled the investigator is in that particular subject; the higher the number, the better. You will use these skills for pretty much everything as you play through a scenario, such as utilizing your investigator’s combat skill to attack a monster or using their intellect to investigate for clues. There is never a guarantee that you will succeed at a particular challenge, so you will always need to stay on your guard and seize as many opportunities as you can.

Beyond their skills, each investigator has their own additional strengths and weaknesses, and we mean that literally! As part of your deck, you will have your investigator’s signature asset card and signature weakness card. For example, the hardboiled fed Roland Banks (Revised Core Set, 1) has his trusty .38 Special (Revised Core Set, 6), the abilities of which work well with his innate ability to discover clues while defeating monsters. However, as someone who wishes to maintain order, sometimes Roland is compelled to Cover Up (Revised Core Set, 7) the horrors he encounters, hindering his progress and possibly even inflicting mental trauma, which permanently lowers his sanity.

You will have other, non-signature weaknesses included in your deck as well, which represents how the heroes of Arkham Horror LCG are not perfect beings—they’re human, and humans are flawed. Rising to the challenge and defeating the forces of the Mythos in spite of these flaws is part of what makes this game so thrilling to play!

To be honest, nothing about the game itself has changed. This is still the same Arkham Horror: The Card Game that many have come to know and love over the past five years, and none of the cards included in the Revised Core Set are new to the game. The rules are the same, the campaign is the same, the experience is the same. Even the cards are mostly the same, with the only difference being the inclusion of a handful of higher-level cards from some of the game’s earlier expansions to give newer players more options when spending experience. But even then, these cards already exist as part of the game, which means if you already have all the existing Arkham Horror LCG products, then there will not be anything in the Revised Core Set that you need for yourself.

However, this is the perfect opportunity to introduce a friend or family member to the game. The Revised Core Set comes with everything a newcomer needs to get their Arkham Horror LCG collection started, including a full playset of cards and components to support up to four players for the initial campaign.

The contents of the box have received an organizational upgrade, meaning that it’s much easier to find specific cards than it was before. Each investigator is packaged right alongside all the cards in their suggested starting deck, and each scenario has all of its cards packaged separately from the others, which means all you will need to do to get started is shuffle the decks and you’re ready to go. On top of that, some additional quality-of-life improvements have been made, such as new numbered resource and clue/threat tokens and even a lead investigator token!

If you have already played Arkham Horror LCG with a friend but have been waiting to get your own copy, then you will love how you can pick up the Revised Core Set and start playing just moments after you open the box. There really is no better time to dive into this fantastic game!