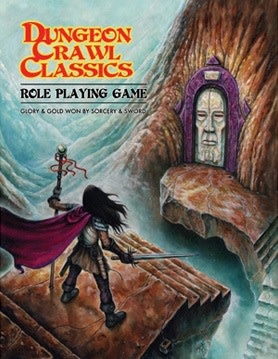 DCC RPG is a fast-paced, open-feeling rules set allowing for epic game experiences without unnecessary tethers. It uses modern game-play while paying homage to the origins of role-playing and the fun that it inspired.

You’re an adventurer: a reaver, a cutpurse, a heathen-slayer, a tight-lipped warlock guarding long-dead secrets. You seek gold and glory, winning it with sword and spell, caked in the blood and filth of the weak, the dark, the demons, and the vanquished. There are treasures to be won deep underneath, and you shall have them.

Return to the glory days of fantasy with the Dungeon Crawl Classics Role-Playing Game. Adventure as 1974 intended, with modern rules grounded in the origins of sword & sorcery. Fast play, cryptic secrets, and a mysterious past await you: turn the page…

DCC RPG is a fast-paced, open-feeling rules set allowing for epic game experiences without unnecessary tethers. It uses modern game-play while paying homage to the origins of role-playing and the fun that it inspired.

Here’s an excerpt from our favorite review (you can find the whole review here):

“This isn’t your father’s D&D…it’s your batsh*t crazy uncles’ D&D, straight from the smokey basement with faded black-light posters on the walls and 80’s Manowar blaring on the old tape deck. You might turn up your nose at first, but once the seven-sided-dice start rolling you find yourself sucked in.”

Here are some other reviews.

• Year of the Dungeon: “Goodman took a very old-school point of view and made a game that manages to offer a fresh perspective on many aspects of the game while loving maintaining all the core tenets of old school play. More importantly, the game doesn’t just provide rules, but it’s a primer on how to get the most out of its chosen style of play.”

• Game Knight Reviews: “The DCC RPG book has a suggested retail price of $39.95, which I think is quite reasonable in an age when smaller hardcover books are going for the same general price point. But when you think about all the art in the book, $40 is a steal. And that’s part of my point about it being distracting. I turn the page and get lost in the art, some of which is amazingly detailed and then I have to reread the page prior to remember what I was reading about.”

• Raven Crowking’s Nest: “Having read the Dungeon Crawl Classics core rulebook rather exhaustively now, I am coming to the conclusion that this will be my go-to game for all time.”

• EN World: “Make no mistake, DCC RPG is not for everyone and it does not try to be. Randomization, heavy use of tables, critical fumbles, and no multiclassing are strong departures from what many new gamers have become accustomed to.”