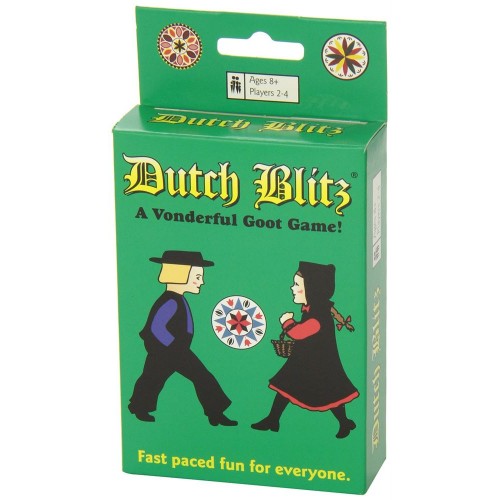 Dutch Blitz® is a highly interactive, highly energetic, family-friendly card game that will test your skills, smarts and speed.

What is Dutch Blitz®?

Dutch Blitz® is a highly interactive, highly energetic, family-friendly card game that will test your skills, smarts and speed.

It’s the kind of game that makes your brain work really hard. But because you’re having so much fun, you won’t even notice. Perfect for parties and family game nights, Dutch Blitz® has been a favorite of card players for decades—and it’s more popular today than ever.

How did Dutch Blitz® begin?

Dutch Blitz® was the brainchild of Werner Ernst George Muller, a German immigrant and optometrist who thought the game might help his children more easily learn about colors and numbers.

We can’t tell you whether or not Dutch Blitz accomplished that goal. All we know is that, somewhere along the line, Muller’s game captured the imaginations of gamers throughout Eastern and Central Pennsylvania.

The game has since spread far and wide, and today, Dutch Blitz fans can be found in every corner of the world — find us on Facebook, Twitter and Instagram) — and can be purchased at more than 200 different locations in 11 different countries.

Can I play with more than 4 players?

Yes! You can buy the Blue Expansion Pack.

We have developed a limited edition of our Vonderful Goot Classic Green game that allows you to play with up to 8 players. Insane!

And, here’s the thing. You can play with this Blue deck — just like Classic Green — with up to 4 players OR combine the two packs to play with 5, 6 , 7 or 8 players. Outta control!

So, what makes the Blue deck different? It’s simply a reinvention of the Classic Green boxed game that you know and love, with the colors of the 4 decks’ designs (carriage, bucket, pump and plow) switched to enable more players. Yes, it’s that simple and that awesome.