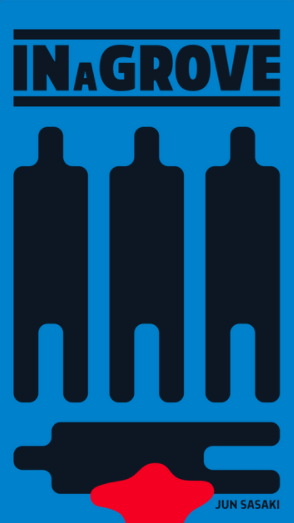 In a Grove — a.k.a. 藪の中, Yabunonaka, and Hattari — is a game of bluffing and deduction, and the player who makes too many false accusations loses the game.

The game is played in rounds. Each round, each player receives one of the eight silhouettes (which are numbered 2-8 with one blank), while three silhouettes are placed in the center of the table as suspects and the final silhouette is dubbed the victim. (With three players, the #2 is removed from the game.) You have to determine which suspect is the culprit, either to accuse him or to lure the other players into accusing someone who's innocent!

The round ends, and players reveal the suspects. Who's the culprit? The suspect bearing the highest number – except if the #5 is among the suspects, in which case the suspect with the lowest number is guilty. (The suspect with no number is always innocent.) Anyone who has accused the correct suspect receives their accusation marker back. Any markers incorrectly placed are flipped colored-side down and given to the player who owns the marker on top of the stack. The first player token rotates clockwise, then a new round begins.

At the end of a turn if a player has eight or more tokens — or has no tokens — then the game ends, and that player loses.